This project examines the effects of the People’s Republic of China’s (PRC) increasingly assertive territorial assertions on their FDI. China’s disputes, ranging from Senkaku Islands, a group of small islets under Japanese suzerainty since 1972, to the South China Sea (SCS), accompany the massive surge of Chinese capital exports to the global economy. In recent decades, China’ s increasing political and military power along with its rapidly accumulating FDI, which surged to a total of $US 1.2 trillion in 2015 alongside Hong Kong’ s own $1.3 trillion, has become a cause of concern for policy makers, political elites and social movements in the developing world. Many of these actors now feel that they must choose between sovereignty and economic development.

Most notably, rather than using inflow-outflow data (figure 1 & 2), which is noisy as it includes remitted payments, this project uses novel dataset on firm registrations. 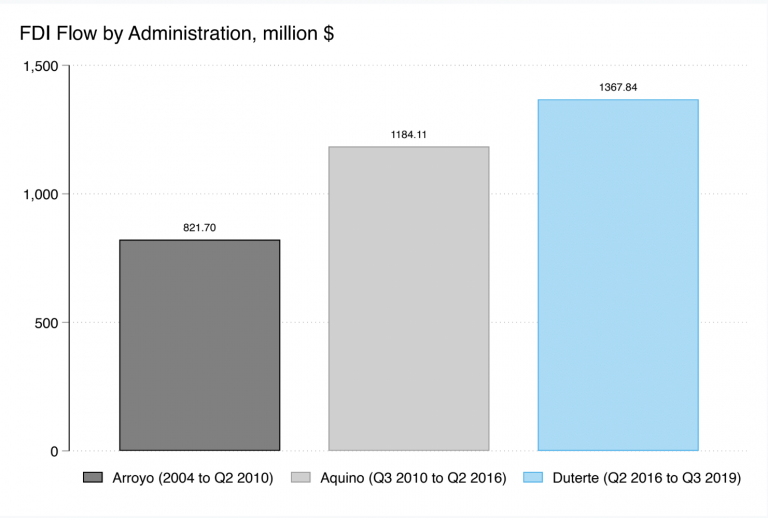 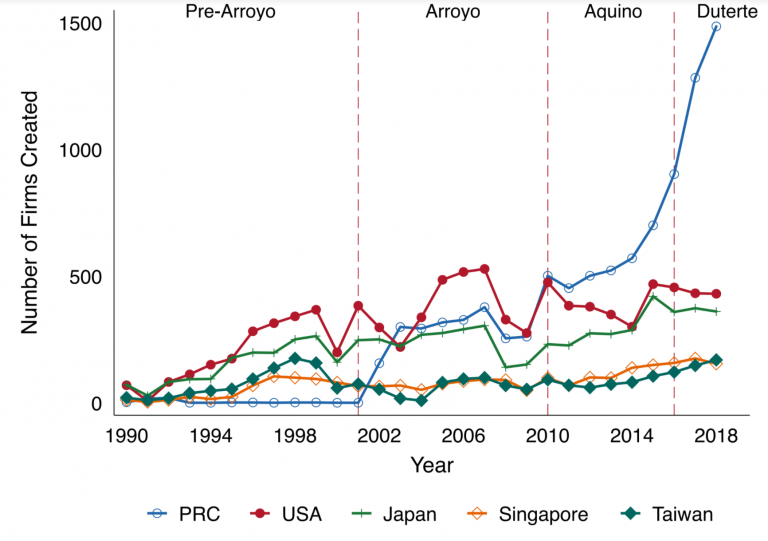 This project is an extension of two previous publications: regressing territorial disputes and Chinese foreign direct investment (FDI) in the Singaporean Economic Review, and investigating the relationship among inter-state relations, state capacity, and Chinese capital in Palgrave Communications.

Two ongoing projects are as follows:

“The Impact of Territorial Disputes on Sectoral FDI,” with Janica Magat.

Previous works on the effects of conflict or dispute on FDI generally focus on increases or decreases of investments nationally, but the question of which sectors receive investments during the eruption or stabilization of disputes goes generally unexamined. We investigate this question in the context of the South China Sea disputes in the Philippines. We use a difference model and find that a regime’s position on the South China Sea (SCS) significantly impacts Chinese FDI. We find that that the annual number of new firm entrants with Chinese investment in primary, secondary, and tertiary sectors are affected differently by the eruption of the disputes or the stabilization of the maritime borders. These findings not only contribute to literatures on the political economy of conflict by examining a different outcome variable, but also affirm works on the varieties of Chinese capital, finding that some sectors are differently affected by geopolitics.

Preliminary results of the project have been presented at the World Bank’s Development Research Group.

“A Survey Experiment on the Filipino, Indonesian, and Malaysian Perceptions of the South China Sea Disputes and Chinese Capital,” with Janica Magat.

We are launching a survey experiment in maritime Southeast Asia, analyzing the impact of non-militarized territorial disputes on the perceptions of Filipinos, Indonesians, and Malaysians. We have designed a survey experiment that carefully allocates the treatment and control. We plan to cover around 600 participants per country, partly also covering the types of Chinese capitals, the Belt and Road, and COVID-19.